Adventures in a Poly Tunnel - December 2017

The end of the year and the time when we gardeners look forward to starting again. Soon we'll be able to start sowing seeds in the UK. I think I usually start a few broad beans in January but, of course, it's best to wait for most things. Sowing too early rarely does any good.
I am just soaking some peas to plant for pea shoots. Apparently you can do that in the depths of winter.
Looking back at the year, I think I've made the most of it. There are always improvements but (hopefully) I'll learn from my mistakes.

Not much growing is happening in December. We've had some very cold weather so the plants are just existing until it warms up. I do minimal watering but there are still some things to harvest. Most things are not very picturesque just now and much tidying is needed. 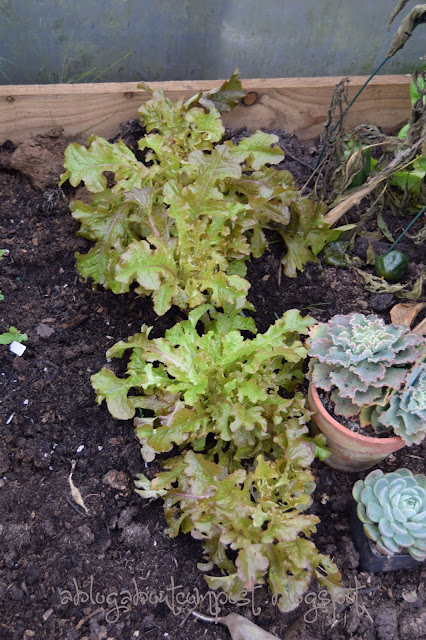 Lettuce - I just pick a few leaves as I need them. 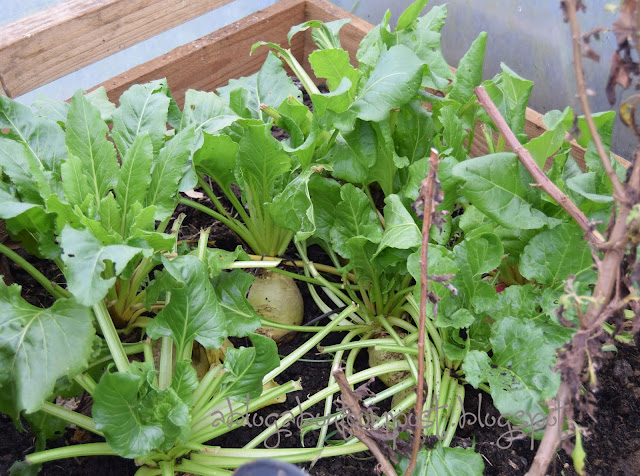 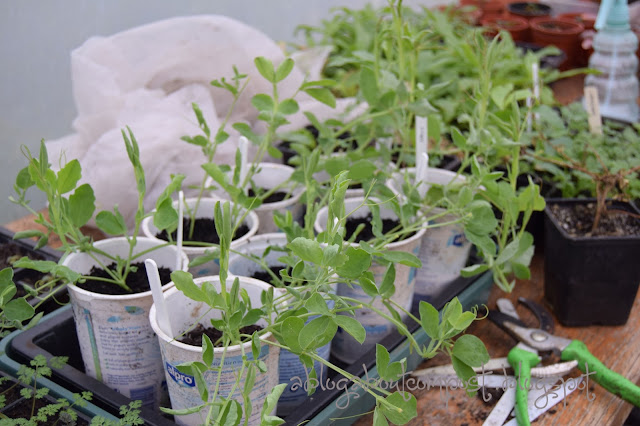 Winter sunshine sweet peas. I should plant these in the border. I'll look for a spare space but most of the ground is still full. I'm hoping to get some early flowers by growing them inside. 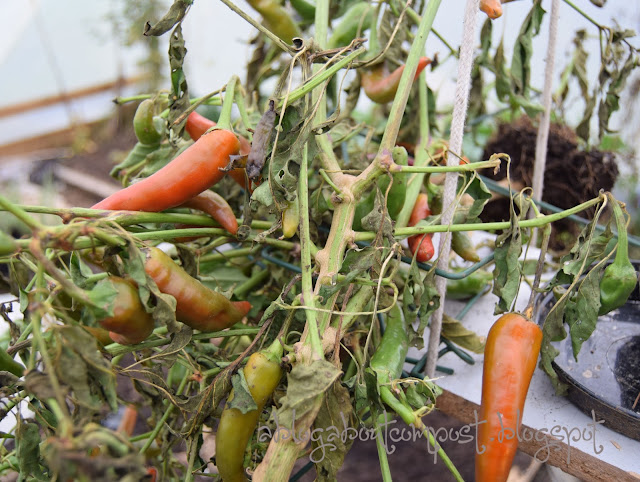 Tangle of chillis waiting to be cut. I've just pulled up the plant. 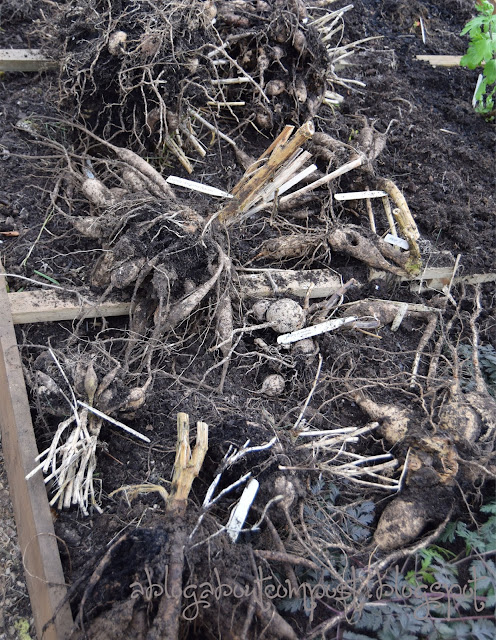 I finally dug up all the dahlia tubers. They are drying here then I will tuck them into the soil under my bench. Each one has two labels so hopefully I will still know what they are in March. 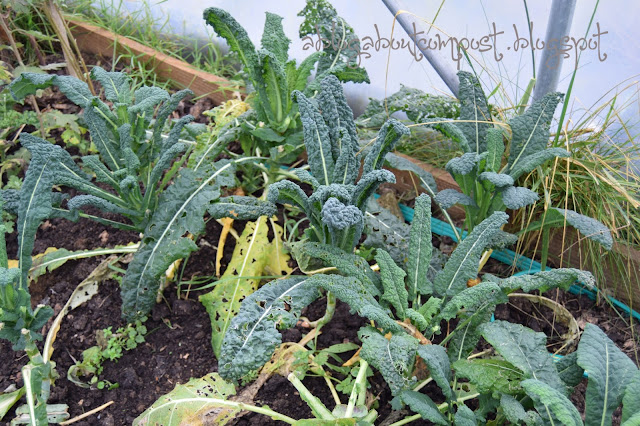 Tidying up the Cavolo Nero is a job for a winter day. 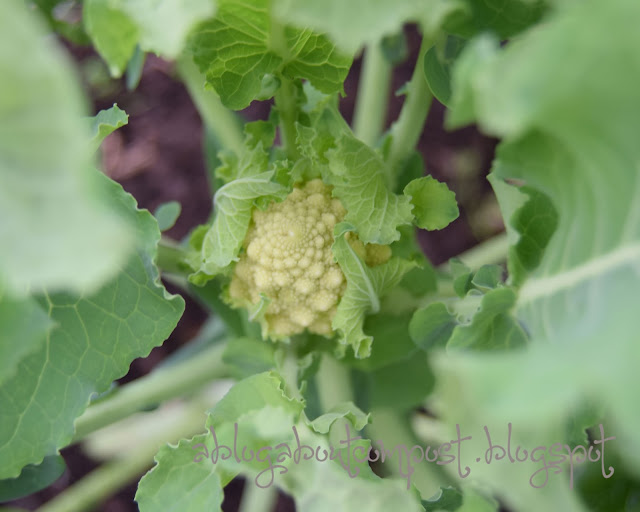 A tiny Romanesco cauliflower. So far only big enough for a Nouveau cuisine recipe but stunningly beautiful.

Nighttime low - -4 ∘C
Daytime high - 29 ∘C Doors at one end may have been closed but it does get very toasty on a sunny day.

Merry Christmas In a Vase on Monday

Flowering on Christmas Day in spite of heavy frosts and a little bit of snow a few weeks ago.  Plants are amazing and that is why we love them. 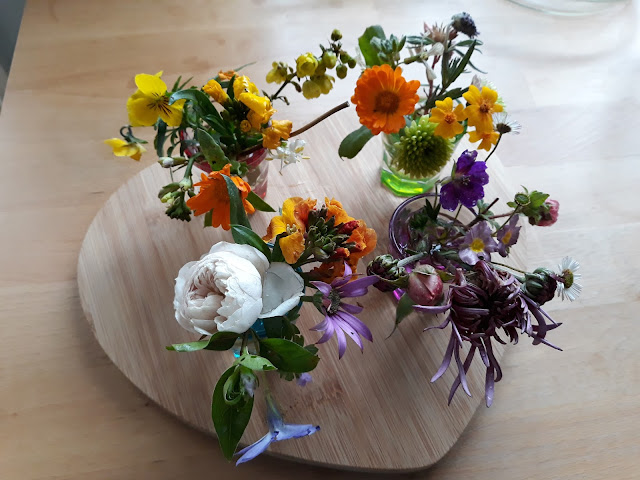 All of these were growing outside apart from this little collection: 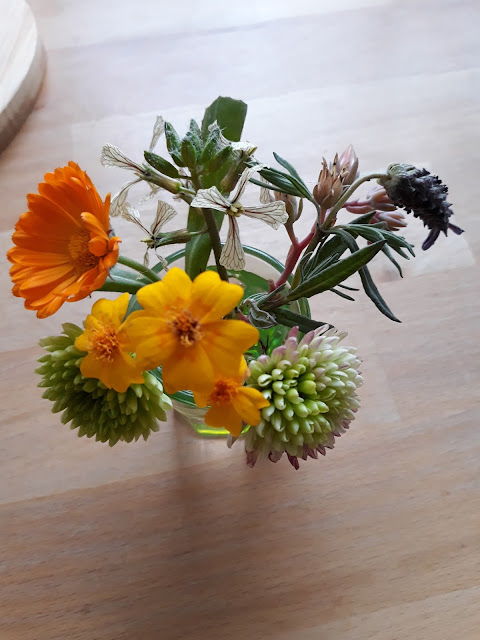 My final treasure - the first Hellebore: 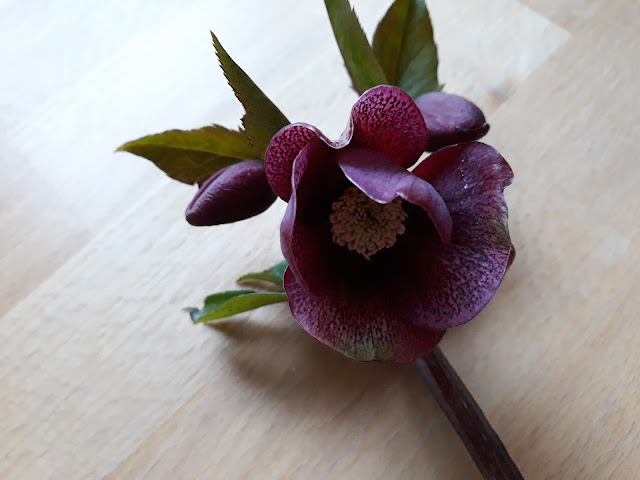 Take heart - spring is just around the corner.
Merry Christmas everyone and thank you for sharing, visiting and commenting throughout the year and thanks, as always, to Cathy for hosting - In a vase on Monday
x
Posted by AlisonC at 10:42 10 comments:

Seasonal colours In a vase on Monday

When it's bleak outside it means even more to bring greenery in to cheer the house. People have been doing that for centuries at this time of year and it's a wonderful tradition to follow.
This is still the only Christmassy thing I have around but there is plenty of time and I do realise it's only tentatively Christmas looking.
We have recently decorated our sitting room and someone removed my mantelpiece when I was outside for half an hour. We had discussed changing it but I didn't expect it to just disappear! The room does look better without it but I don't know where to put my Christmas Ivy and I often have a vase up there. The room still looks rather bare as we haven't accumulated much clutter yet (it's only a matter of time) so this vase is some welcome colour and exuberance. 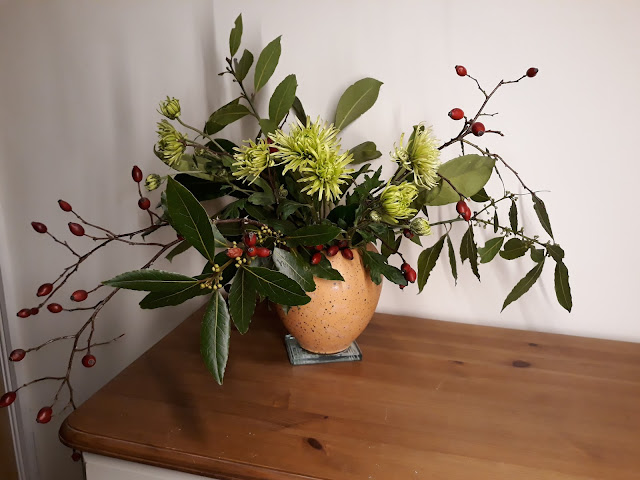 I wasn't very sure about it when I put it together but it looks fabulous from my usual seat which is a different viewing angle. I struggled to get a picture in the bad light. I should have taken it outside this morning.

I've used Laurel. We have quite a few of these plants and my son has campaigned for their removal. I'm not a fan but they do provide much needed shelter and, of course, they are evergreen.
Bay - sprigs with buds
Rose hips - so lovely to have the colour.
Chrysanthemum - I think these are Anastasia Green. These are growing under cover.

For plenty of vibrant vases visit Cathy at Rambling in the Garden for In a vase on Monday and join in the fun with whatever you can find to enhance your home.
Posted by AlisonC at 17:58 14 comments:

Chilli weather In a Vase on Monday

It's not Chilli weather at all it's chilly weather.
I'd planned to go round on Sunday afternoon and collect up all the little flowers for a mini arrangement but we were blessed with sleety snow for the whole day. The last few days have been changeable and challenging. Very cold frosty weather, then heavy rain and high winds then snow. The snow didn't settle well here due to all the heavy rain but other places have had plenty. I can't complain - I have a warm house and power and the roads were no frozen here this morning.
It turned out not to be much of a day for wandering around outside so I collected these on one of my trips out to make sure the poor hens weren't freezing. Some days their water has frozen so I go out regularly to make sure they are OK. (They were, they had the sense to go inside). 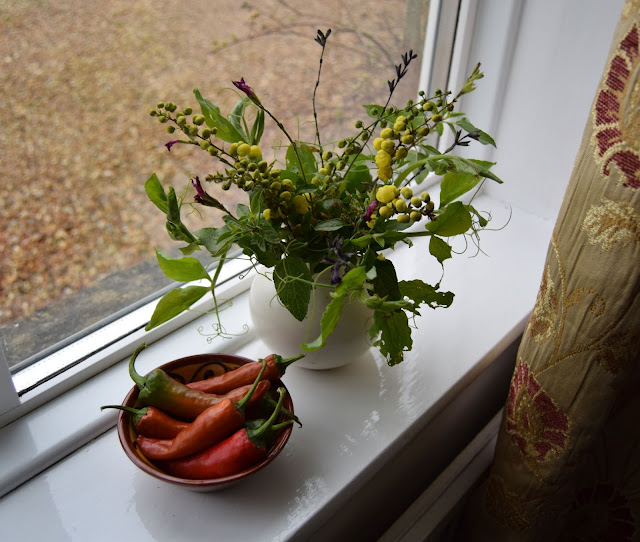 My fall back was going to be these these chillis which I cut from plants in the poly tunnel just this week. I popped them into this bowl for now.
In the vase:
Salvia - I've temporarily lost the name but it's bright pink. It turned out there were hardly any flowers left so I added
Mahonia flowers - very sweetly scented.
Sweet pea fronds - no, I don't know why they are still alive.
Also a few 'Violette de Loire' Salvia heads which had no petals once I got them inside. 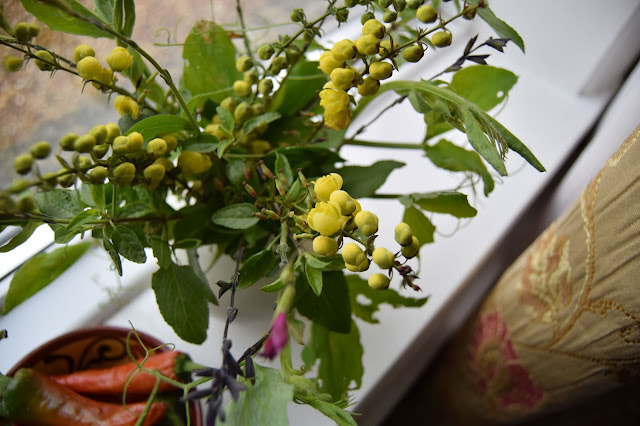 This looks just right on my windowsill.
See what other people have found to put in a vase at Rambling in the Garden hosted by Cathy.

Email ThisBlogThis!Share to TwitterShare to FacebookShare to Pinterest
Labels: IAVOM

Adventures in a Poly Tunnel - November 2017

Late again, time flies but this time of year is worse than ever and I've been decorating as well just to make myself really busy.
Things still look very green in the tunnel and there are things to eat as well. Maintenance has slowed down considerably. Watering is down to about once a week unless we have a particularly sunny spell. I'm more prone to over watering so I am trying to be more careful. 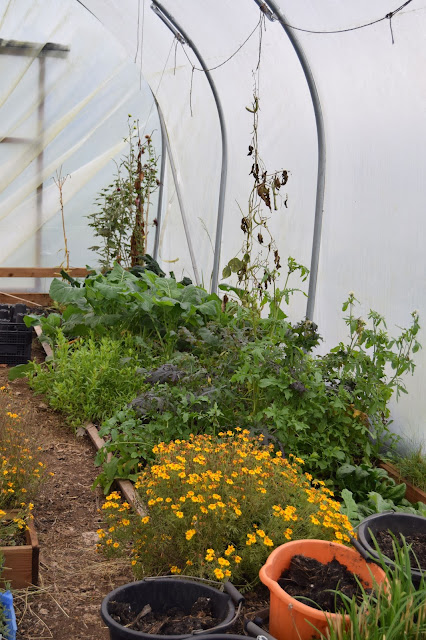 You can see how green it still is down the rhs. Tagetes, rocket, kale, Mignonette and Romanesco and Chrysanths in the corner. No photo here but you can see them in my IAVOM posts. 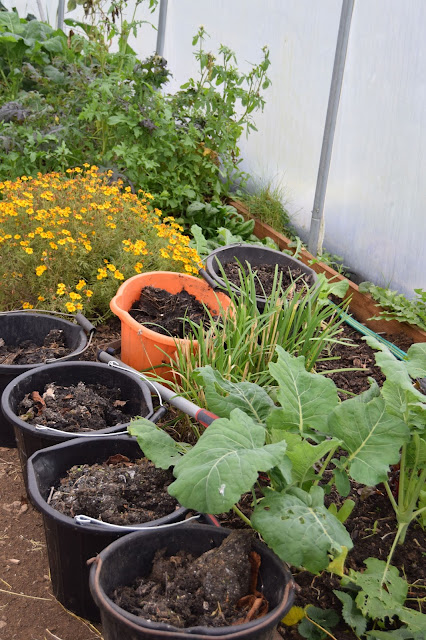 I dug out my compost heap but I wanted to save some of the compost so here it is. I wasn't ready for spreading it in some areas, I need to week and tidy first but now I have a small supply here. I know it won't go far. 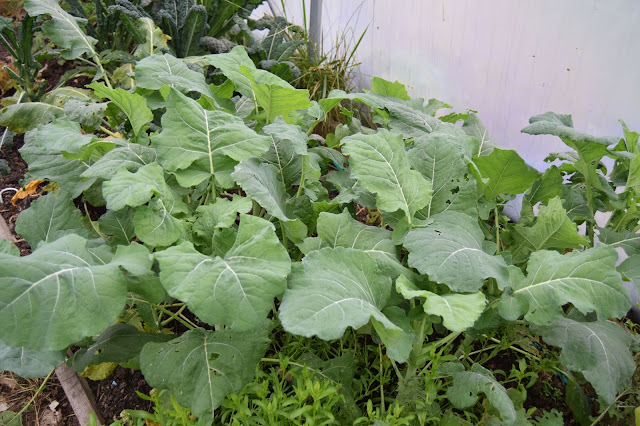 These are Romanesco Cauliflowers. They look fantastic and we have had one small flower which I forgot to photograph but it did taste good and I hope to get some more. I've probably planted them to close together and I should  thin them out. 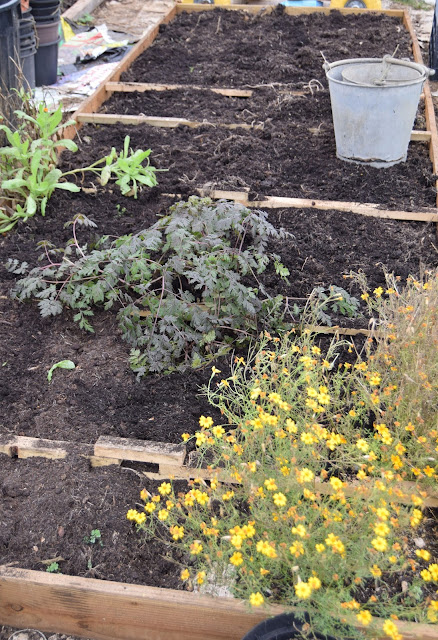 Central bed. The tomatoes came out this month. I collected any left to ripen indoors and ate some today. After as slow start they have been a huge success and No Blight right up to the end! So I was happy to spread out the soil from the pots on this bed. Seedlings will be going in here: 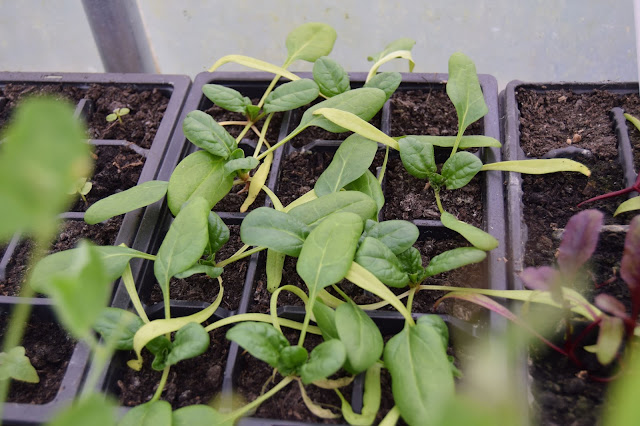 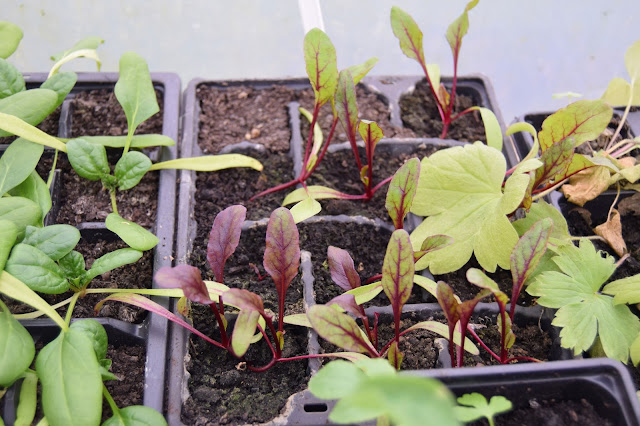 I don't think they will produce any beetroot but we do eat the leaves in salad. 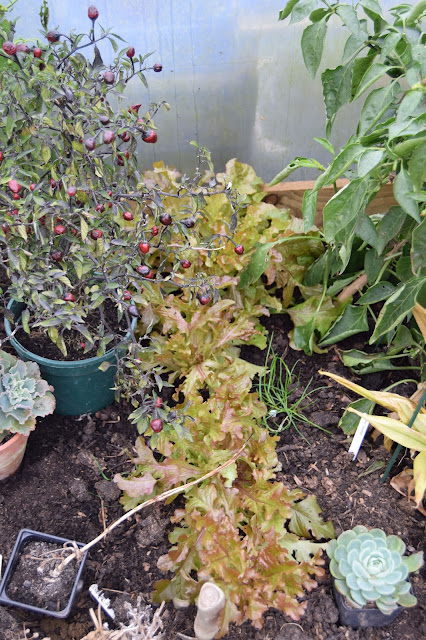 I still have lettuce to cut but he chillis and peppers have suffered from the frost. 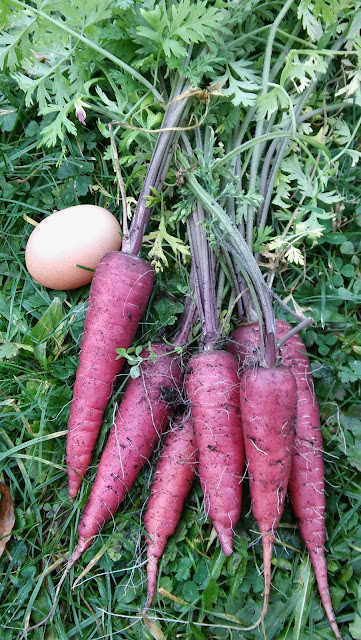 Finally an unexpected success story and a lesson to be learned.
I've never managed to grow a decent carrot. I sowed some seeds in a very large pot this summer and most of them failed to germinate. However a few did and I gave them the odd watering. While tidying up one day I decided to pull them up and there were six respectable carrots. I was amazed. Shown here with an egg I had to hand, to give an idea of scale. Amazing! 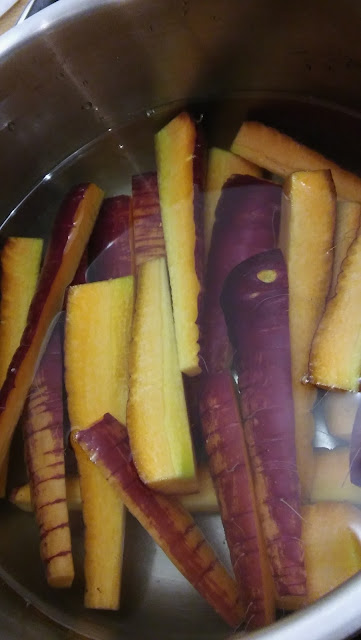 They were, as you see, purple skinned but orange inside and tasted very carrotty.
The lesson learnt is that thinning is very important. There were only 6 growing in a 50-60cm pot. Maybe not a good use of space if you grew all your carrots that way.

Harvesting inside and out:
Kale
6 Carrots
The last couple of courgettes in early Nov.
Leeks
Beetroot
The end of the tomatoes
Lettuce
Spinach
Herbs
Chillis
Peppers
Posted by AlisonC at 21:07 1 comment:

More Chrysanthemums In a Vase on Monday

As usual I'm joining in with In a Vase on Monday hosted by Cathy from Rambling in the Garden. It is getting more challenging but thanks to my Chrysanthemums I have lots to show.
Anyone who is tired of me and my Chrysanthemums should look away now. If you did though, you'd miss this:

These are not the same as last week, these are darker  and less frilly. 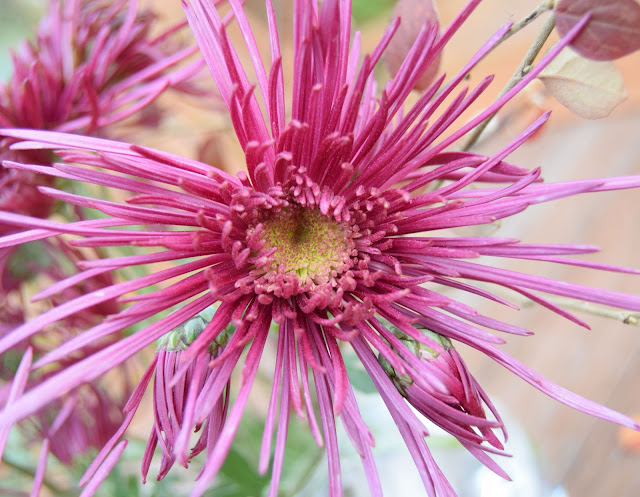 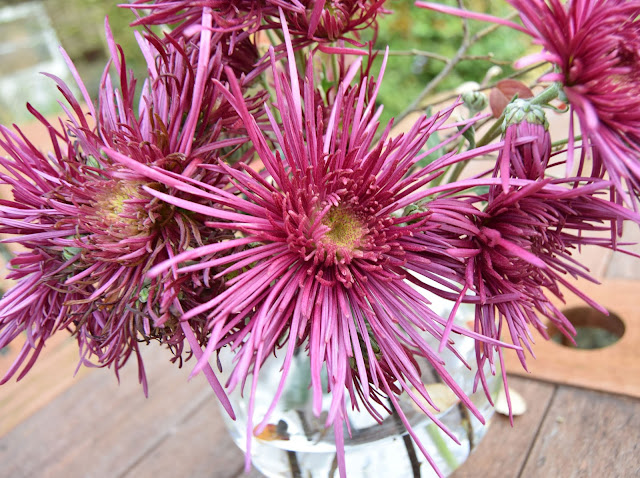 I cut a few stems of Cotoneaster to go with them but they don't show much here and I think are going to drop their leaves very quickly.
Here is a posy I took to my mother in law, I thought I'd share the joy as I have lots of flowers even in December.


They immediately went into an elegant, square, cream coloured vase with a slight mother-of-pearl colouring to it. (Envious? Me?) They looked lovely on the hearth, even if I do say so myself. I've got some in a vase and the red and green are great together and these green ones will open up more.
Porto is growing in my poly tunnel having been moved inside about 6 weeks ago. Shamrock is also inside but the purple one is growing outside with 'Saratov Lilac', from last week, and seem perfectly happy. I think I will move them in soon.
I decided to see if I could find out how much I'd paid for them. After a bit of research I found I'd paid £17 for 10 rooted cuttings. (Sarah Raven - Abundant and Sea Urchin collections). I've currently got three vases of them at home and have given one away this week. There are more I could pick outside and,of course, with careful overwintering, I should be able to keep the plants and/or take cuttings for next year.
I'm happy with that extravagance!
Posted by AlisonC at 09:17 15 comments: