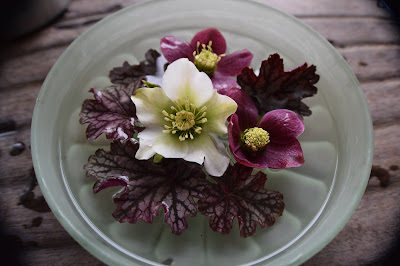 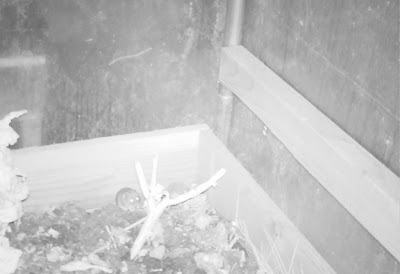 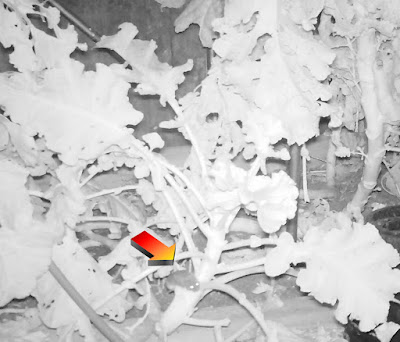 For interesting and creative vases from around the world visit Cathy of Rambling in the Garden - In a Vase on Monday.
Posted by AlisonC at 09:23 16 comments:


What else is the star just now but snowdrops?
This is our second winter in this house. We moved in summer so had a good idea what was in the garden but, of course, had no idea about what bulbs would come up in spring. It was exciting to see things popping up and wait to see what they were.

These snowdrops are growing in an inaccessible hedge so picking them involved wet twigs snapping in the face but, I think you'll agree, was worth it. There are lots of them so I felt no guilt in picking plenty.
I believe them to be flore pleno but ready to be corrected by anyone who knows better.
Shown here with Vinca minor. They are growing together so they must like each other.
Their sweet, gentle scent is permeating the room. 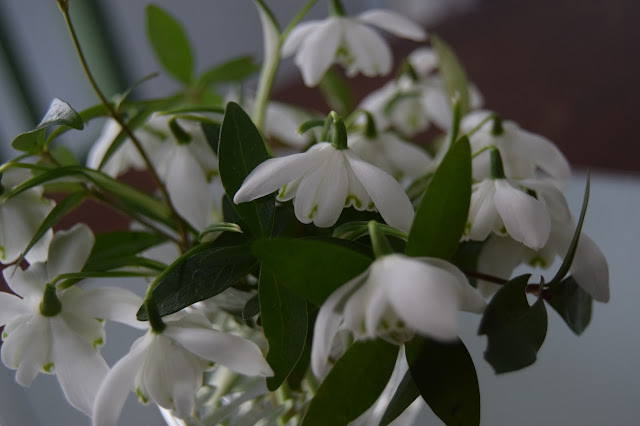 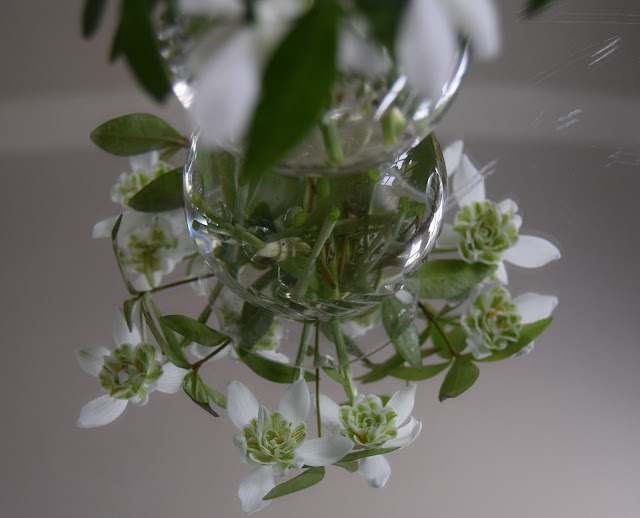 I've taken my own advice and placed them on a mirror. My husband produced this from his car boot. It's a truck wing mirror which is scratched and can't be sold and it's perfect for showing them off. 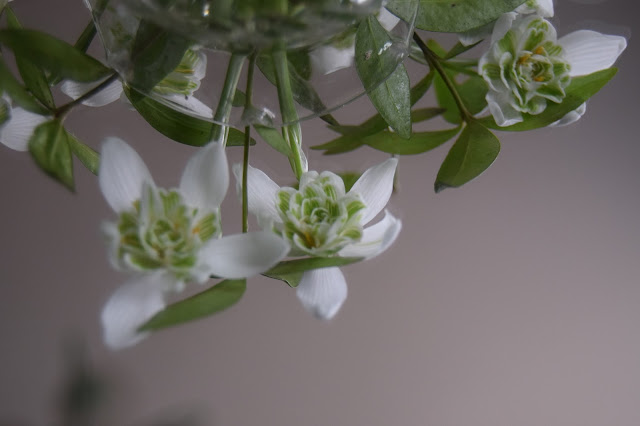 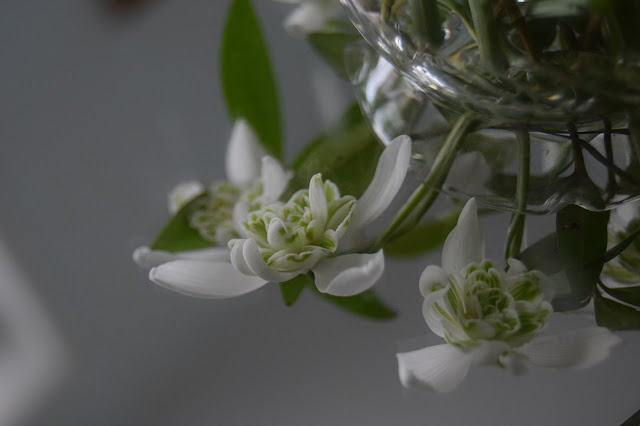 Photography then becomes very difficult as everything is reflected in the mirror. Lampshades, windows, my own head! 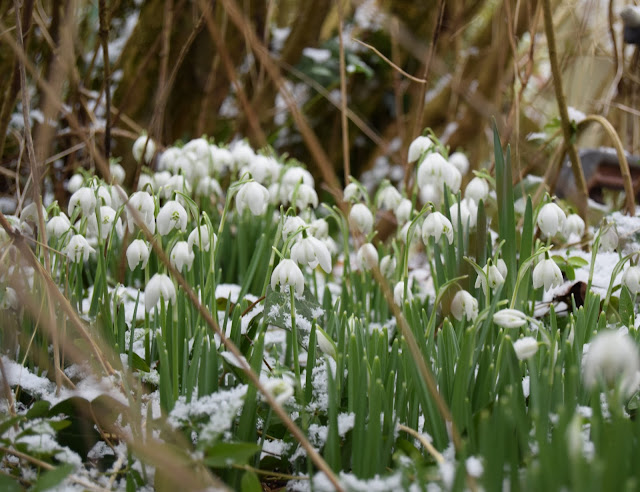 We had a tiny sprinkling of snow on Saturday so I tried to photograph snowdrops in the snow. So many as you see, this is about a quarter of them.
I'm planning to dive into the hedge with a trowel in a few weeks time to move some elsewhere. There are plenty of places where they could be tucked in and seen more easily and without risk to health. In fact, I'd like them everywhere. 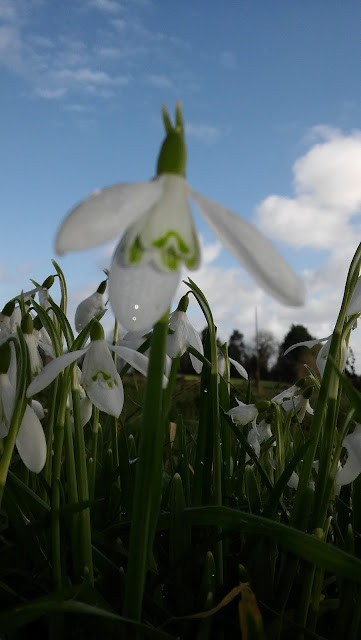 Here is a fun picture I took with my mobile phone. I think the flash went off, hence the strange light. I was holding it underneath to try and take a photo for identification purposes.I managed to get myself in some of these photos.  I'm new to this game but they are quite large flowers and I think are probably 'S Arnott'.
I'm now thinking I'll need to get some more varieties!

I've discovered out local town is hosting a Snowdrop festival next weekend. Apparently breeder James Allen used to live here. He bred many new varieties some of which remain incluing 'Merlin' and 'Magnet'. Now I know, I'll have to get involved. 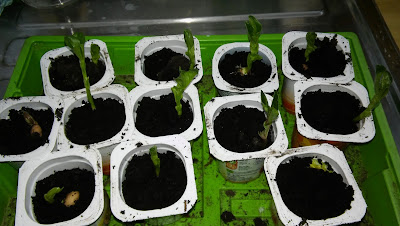 The yoghurt manufacturers have kindly re-designed the pots so they stack nicely inside each other and make perfect little plant pots. Take care to make holes in the bases before planting as it's much more dicey afterwards. Ask me how I know...
These won't be in the pots for long so are big enough.
I've started some sweet peas in the same way.

Furry pests:
I've decided the culprit eating the beetroot tops is probably mice. They have moved onto the spinach and I can see a hole going under the edge of the poly tunnel wall. It has been very cold outside to a meal provided out of the wind would be very inviting.
I dug up the beetroot and we ate them just to make sure nothing got to them first. They were very good, maybe some loss of flavour but certainly a treat in February.

For fun and creative vases from around the world visit 'In a vase on Monday' hosted by Cathy at Rambling in the Garden.

Ps. In the language of flowers, snowdrops mean hope, consolation and a friend in adversity.
Posted by AlisonC at 09:18 13 comments:

A vase and a mystery

We've had a change in the weather. I'm not kidding myself that winter is over but things are moving.
Saturday was the first day this year I spent outside. The sun came out and it felt WARM. Previously I've run out carried out a job at high speed and run back in for a cup of something nice.
I started clearing round the base of a hedge to remove competition and giving it a good  feed. The cleaned one side of the poly tunnel wall which had gone green over winter. Not the most pleasant of jobs as it involved water dripping down my arm but looks so good now it's done and so much more light is coming in.
Conversly, Sunday was very cold again and though I told myself I'd go out and get busy, it was back to dashing in and out.

My vase this week is tiny but all silver and pink. 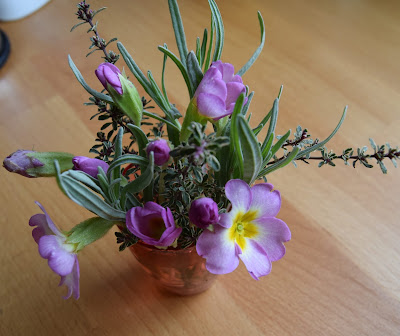 Thyme 'Silver Posie, Lavender shoots and pink primula. I'm not really one for all the different colour primulas and polyanthus. This one, however, popped up in the grass in our last garden and was so pretty I had to move it to safety. Then it was one of the many plants which moved with us, now a large clump. It must have crossed with a primrose.
I think it's because it's such a sweet pink and is a classic flower as a child might draw.


I know I said I wasn't sowing any seeds until the middle of February, but broad beans are different!
I've used a technique I heard on the radio. UK gardeners may be familiar with Terry Walton. I heard him on the radio sharing his method.
I soaked the beans and then put them in a bag with some damp compost. This is after a few days: 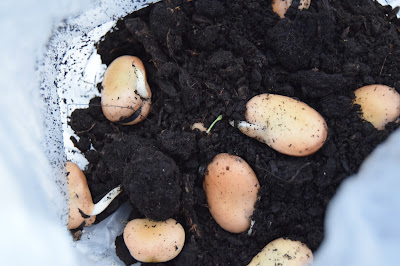 and this about a week: 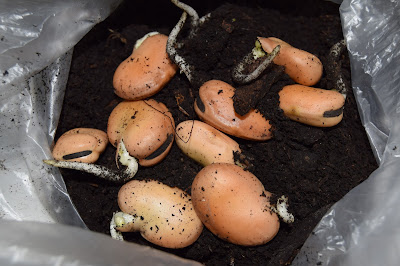 For the record, they all germinated.
I've potted them into small posts and I'm keeping them inside for now. I've had trouble with mice eating peas and beans so I'm taking no chances. They root out the pea and just leave a wilted shoot on the compost.
I think I'll try peas and sweet peas in the same way. I've germinated them on kitchen paper before but this is probably better.

Finally, a mystery.
I had tucked some beetroot under the bench in the tunnel last autumn. I've never watered them as I wanted them to store. They did, however, grow leaves and I had picked a very few for salads.
This week all the leaves have gone. 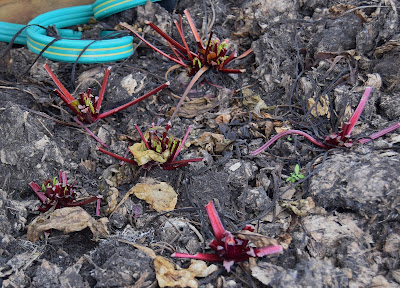 I don't know what has eaten them. I'm pretty sure it's not slugs and it was too much really for mice or voles. The leaves were 8-10 inches. I've never seen a rabbit in the garden (and don't want to) and there are no droppings,  but we have seen hares nearby and deer so I suspect one of them. The stems are cut off at and angle which is a sign of rabbits apparently.
One of the strangest things is that nothing else has been touched,yet. There is spinach, kale and a few lettuces which you'd think would be attractive.
You can see new leaves are already starting to grow.
Any ideas?

For inspiring and creative vases from around the world visit 'In a vase on Monday' hosted by Cathy from Rambling in the garden.