Cupcakes In a Vase on Monday

Well, we finally got some rain, along with strong winds. It's such a relief not to feel I should be watering everything every moment of the day. There is still undercover watering to do, of course, but I expect that.
I did predict this as the schools have broken up for summer here and MrC has gone camping with a Scout troop. At least there is some chance of getting tent pegs in the ground.
There have been plant casualties but how far that goes remains to be seen. Every day for the last month I have found a new plant shrivelled or drooping, some have been saved but some not. Well established shrubs have suffered as well as new planting. We have barely had any rain for two months and that, along with high temperatures, has meant plants are struggling.
The water butts are filling up again, at least for now, so that will help the water bills a little.

The good news is that there is still plenty flowering. Many flowers love the hot weather as long as their roots can find some water.

Here is Cosmos 'Cupcakes' collected together in a vase with their own foliage. 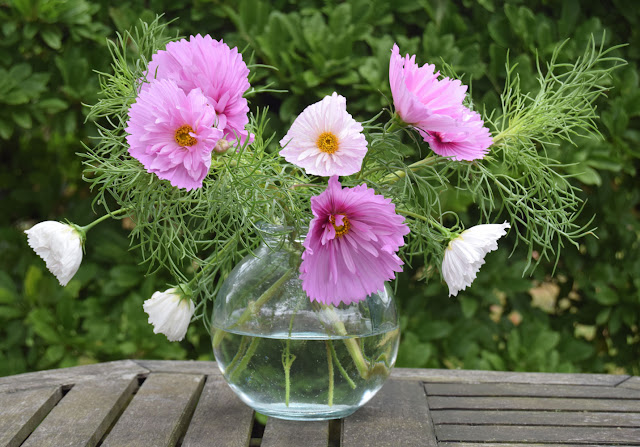 Every bit as pretty as I'd expected and they last well as do the normal Cosmos. These are a mixed packet so each one is different pink and white and even a blush. Airy and delicate. I feared they would never flower as they produced lush foliage and not buds. I've discovered that it is too much nitrogen which produces this effect.
If I was Cathy I'd have a cupcake enhancing my photo but I need to have a baking session so none are available. 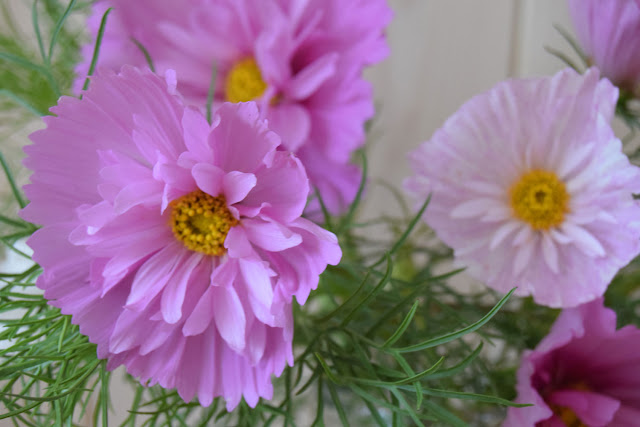 Also here are a couple of Dahlias. 'Cafe au Lait' - every florist wants to get their hands on this, I need plenty more tubers next year - and 'Thomas A Edison'. This dropped into my basket last autumn and has not disappointed. 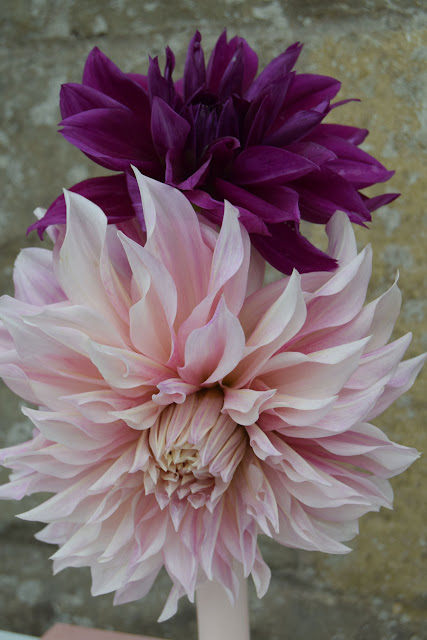 I've even done indoor jobs today, without feeling I should be outside, some long overdue so now I must get on with the outdoor jobs. The sky is still threatening more rain.
Thanks for visiting. I'm linking with Cathy at Rambling in the Garden for In a Vase on Monday.
Posted by AlisonC at 11:25 14 comments:

Miniature In a Vase on Monday

Small is beautiful, as they say,  and I think this vase fits that description. 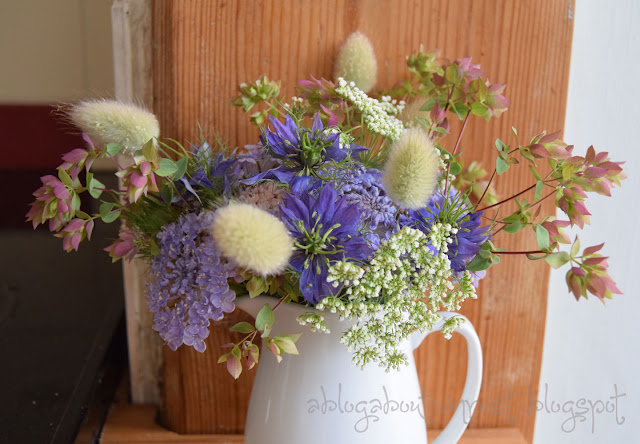 I've managed to grow Didiscus caeruleus properly for the first time. This is Lace Mixture.
There is pink and white as well as the blue but I find the pink is quite insipid. 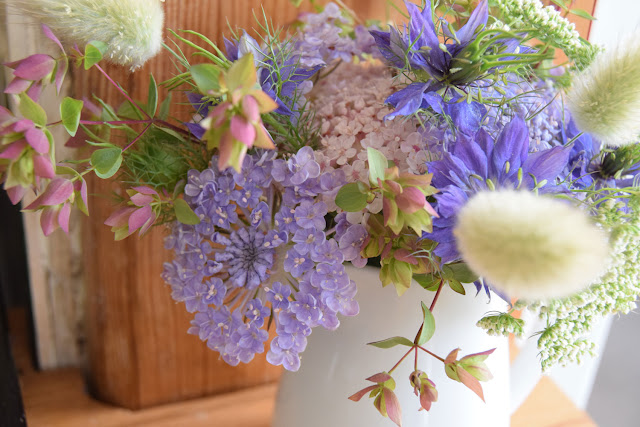 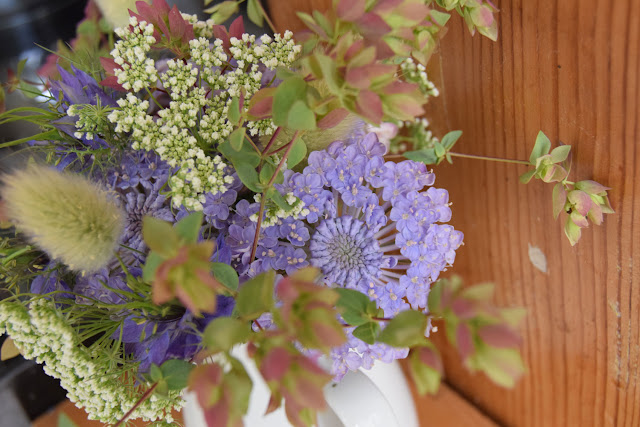 I've included some small Ammi majus heads which I like as much if not more than the larger ones. Bunny tails grass which has very short stems but is soft and cute. Nigella and some kind of ornamental oregano which has pretty pink heads. All popped into one of my many white jugs.
Hop over to Cathy at Rambling in the Garden to see what interesting and intriguing things everyone has added to their vases this week.
Posted by AlisonC at 15:30 12 comments:

Sweet as sugar candy In a Vase on Monday 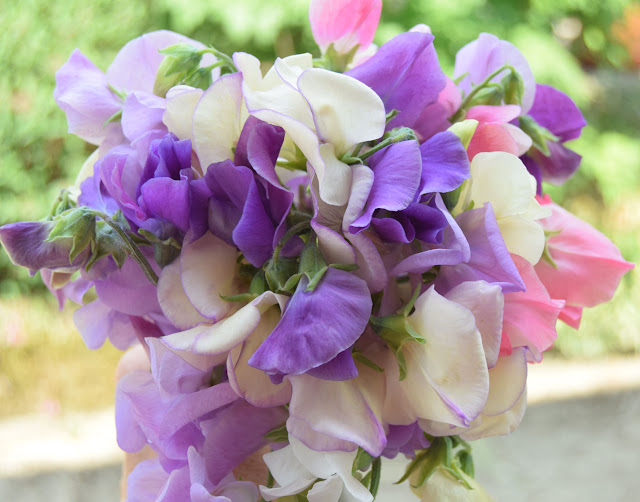 They are a  mixture off different varieties. There is some organisation in the planting but not by the time they get as far as the house. I think the purple is probably from a mixture called Twilight.
I'm not going to go on about the weather except to say - it's no less desperate. But amongst all the frazzling of plants are some surprises. 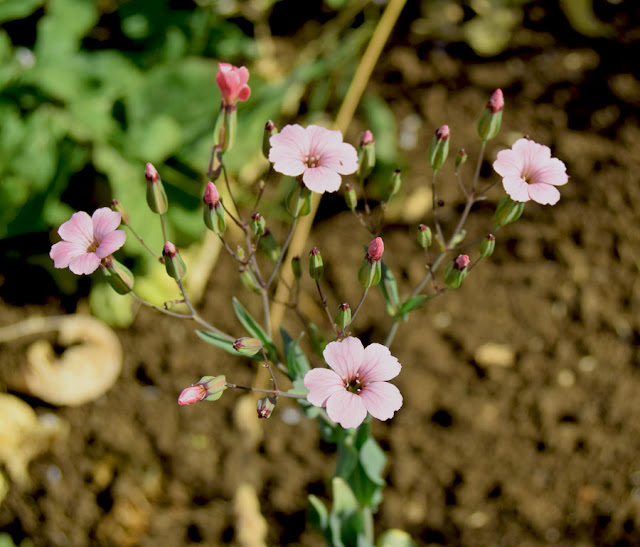 I've tried on many occasions to grow Gypsophila and always failed. This one has grown from a seed mix I threw in just before the drought. There is precious little else growing there as I have not been able to water it but this hardy little plant is thriving and has turned out pink! Love it.
I've noticed before that sometimes direct sown seeds produce better plants which are less prone to pest damage. Perhaps not a fair test this year and often my direct sowings fail to show at all.
I look forward to seeing what people have found to put In a Vase on Monday hosted by Cathy at Rambling in the Garden.
Posted by AlisonC at 18:23 10 comments:

In a Vase on Monday - Situation desperate!

The water situation, that is. We haven't had rain for weeks and have had hot sun instead.
Things which I regard as tough plants are starting to wilt and smaller, shallow rooted ones have frazzled.
As I pour the washing up water over the garden, I have renewed sympathy and understanding for those of you who live where this heat is normal. With no rain forecast and water butts pretty much empty, I continue to water selectively knowing I will lose things but is not possible, or probably sensible, to water everything.
On the bright side - slug damage is practically nil and I have picked dwarf French beans which are normally devastated.
Many things are blooming and I've gone for cool colours rather than the brights Cathy chose. 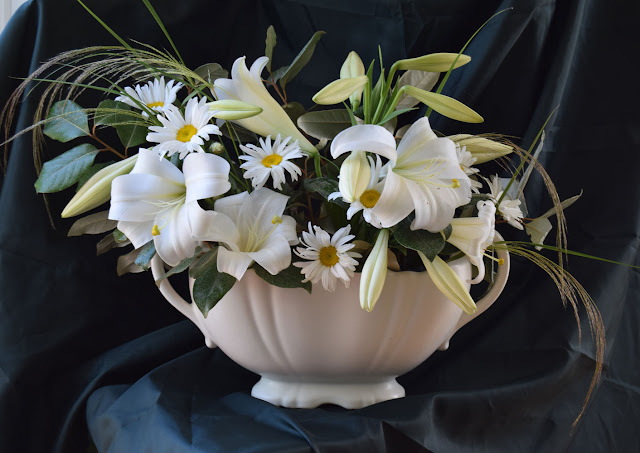 I used another of my 'Constance Spry' vases. I found these lilies difficult to get in the right place. Of course the buds will open and change the look every day. They have been grown in my poly tunnel and thrive on neglect. The same bulbs have been there for three years.
I pulled off the pollen from the ends of the stamens but actually, I think it spoils the look of the flower. If anyone is going to get pollen stains on clothes and carpet though, it will be me so was probably a sensible precaution.

My Flower Farm crops are doing well. They have had more water in the last few weeks than the main garden while I try to keep little plants alive. Here is part of it, in case you are interested. There is another bed the same size behind this planted with smaller plants. I also have dahlias and sweet peas elsewhere as well as flowers in the poly tunnel so plenty to cut. 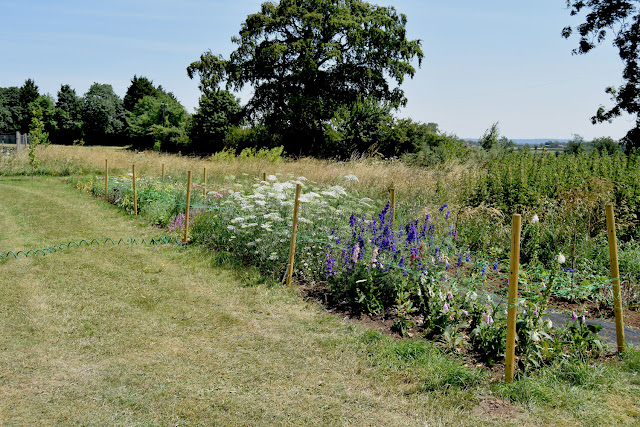 Taken in the middle of the day but you can see the grass is suffering. I've even found shrivelled weeds.
I certainly picked a challenging year to start. (Really, I think all years are challenging in different ways).
For plenty of fun and fancy vases visit Cathy at Rambling in the Garden for In a vase on Monday.
Posted by AlisonC at 13:51 20 comments: