Encouraging spring In a Vase on Monday

The stars were in alignment for me on Saturday and I was able to spend the whole day outside for the first time this year. I came in with every bone aching, nettle stings on my hands and a great sense of achievement and satisfaction. I have whittled away at the winter jobs over the last month, I'm not saying they are all done, but I have certainly made better progress than last year. Winter is not over yet though, but the weeds are starting to grow so Spring must be on the way.
I've started a very few seeds but we are promised a cold snap in the next few weeks so I am not getting carried away. I don't want lots of leggy seedlings and no-where to put them. Our safe planting date is still at least 3 months away so patience is necessary.
In the meantime I've forced spring on a bit with this vase. 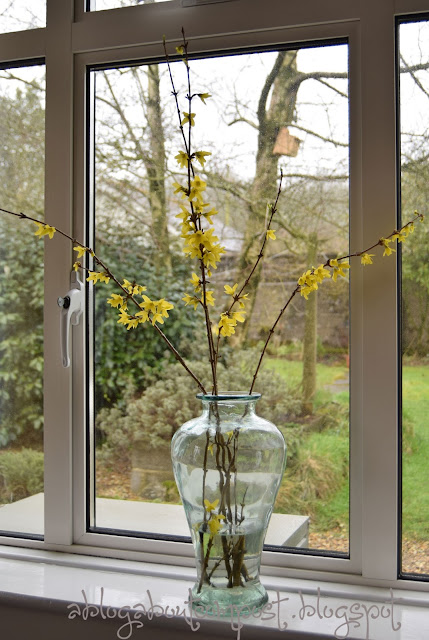 About 2 weeks ago I brought these Forsythia twigs inside after reading that you can force them to open early, particularly on Chloris' blog. I read that on the 5th Feb and sometime in the next few days I cut these branches. They really were in very tight bud but have opened up so very quickly.
It wasn't easy to get a good picture but here you can see the grey outside and the sunshine inside.
I don't often have anything big enough for this tall, heavy glass vase. 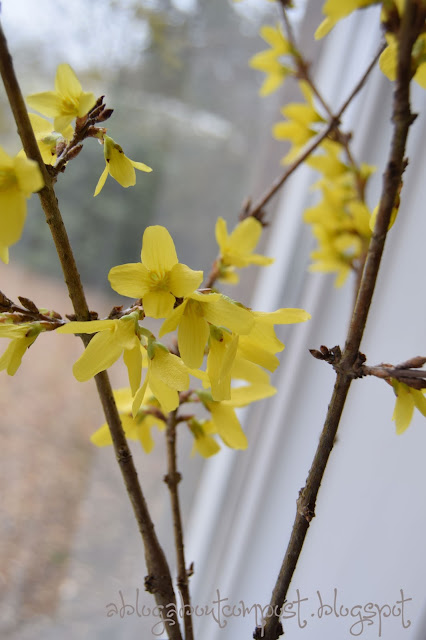 Interestingly, the buds on the Cornus and Leycesteria in last week's vase have also started to open. I'm keeping them so see how far they go and if I can use them next week and perhaps add something else!
I'm joining Cathy at Rambling in the Garden for In a vase on Monday. She encourages to look around to see what we can bring in to put in a vase, jam jar, jug or teapot, as she has used today.
Posted by AlisonC at 09:00 25 comments:

Green and white In a Vase on Monday.

I've managed to make a big vase and that makes me happy. 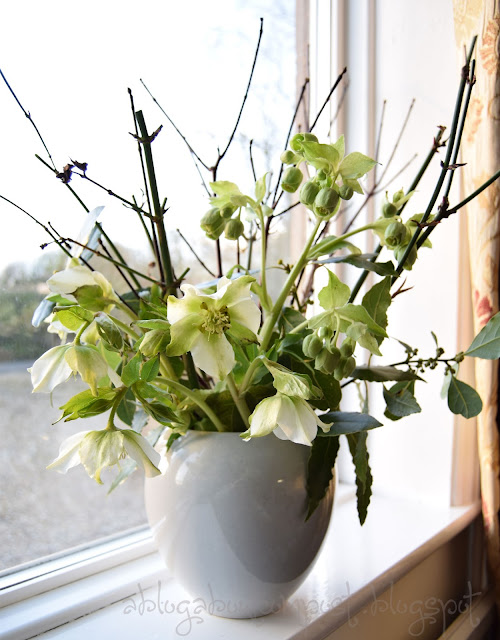 I collected some Hellebores and then some twigs to add some height.
I pushed in behind our oil tank to cut this Helleborus foetidus and then looked around to see what else could go in. 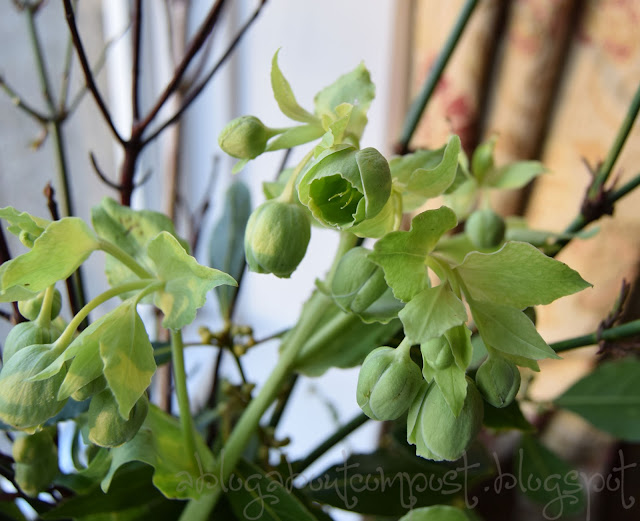 Just next to it is a Leycesteria which needs a prune so that was a good reason to cut some green stems. The last week I pruned a Cornus. It has very dark red stems and, though not very big yet, I know it will benefit from a hard cut. So I dived in and did it and the red stems are here.

Oh yes, there is some Bay too. 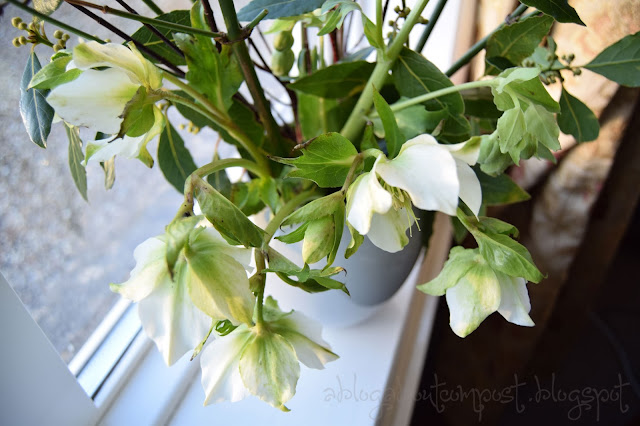 The I added this white and green hellebore. It would not win prizes as the colouring is not good but it has been flowering now for weeks and I am quite happy to have it in the garden and in a vase. I did sear the stems in boiling water to see if they will last a little longer.
See what you can find to share in a vase an join in with Cathy at Rambling in the Garden for In a Vase on Monday.
Posted by AlisonC at 09:00 16 comments:

Meet George In a Vase on Monday 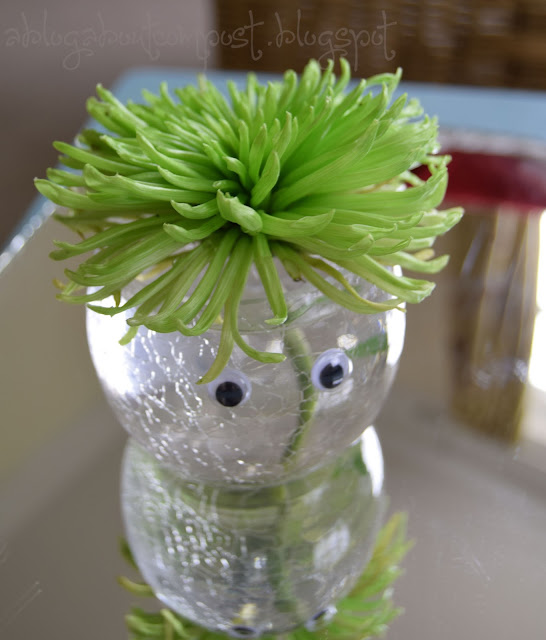 Here is looking out of the window. 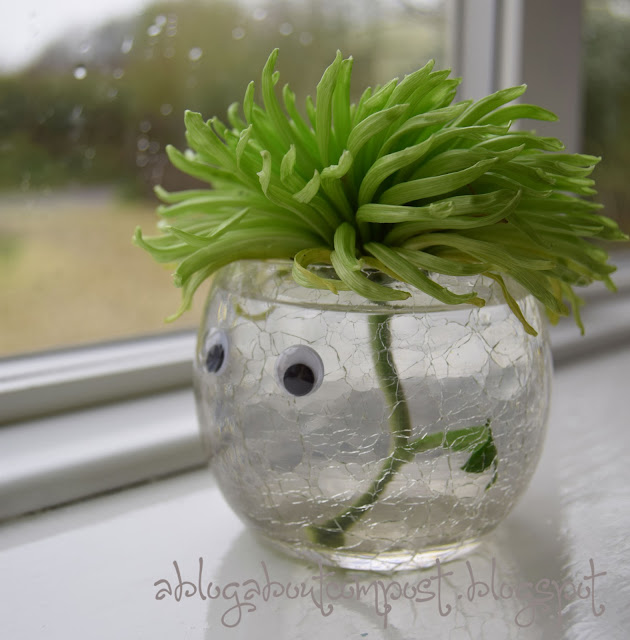 I discovered this Chrysanthemum flower (Anastasia Green) on a plant which I'm saving for cuttings in the green house.
I popped it into the vase from which I'd just removed the snowdrops then couldn't resist adding the googly eyes.

If you've found something fun or fancy to put in a vase this week join in with Cathy at Rambling in the Garden - In a Vase on Monday.

Adventures in a Poly Tunnel - January 2018

If you think there is nothing going on in a tunnel in January, you'd be wrong. There is still plenty growing in spite of the widely varying temperatures and lack of sunlight.
The month has been dominated by rain but, of course, it doesn't get in here. 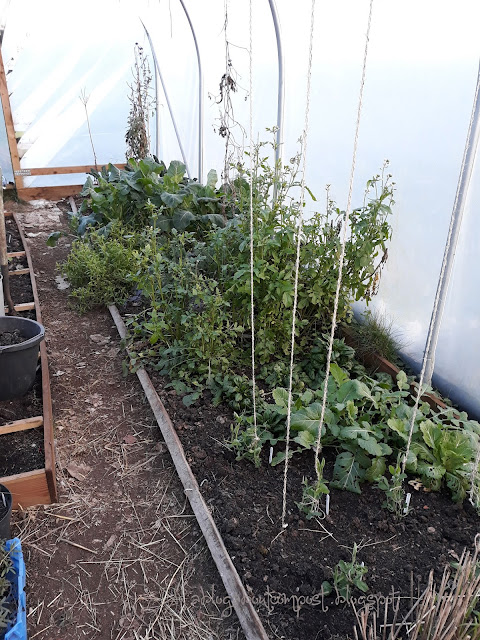 You can see there is still plenty growing. Three turnips, spinach, rocket, kale and Romanesco. 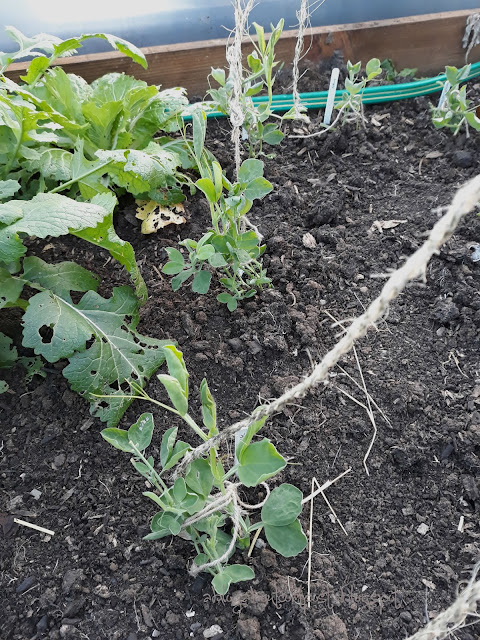 These are my Winter Sunshine sweet peas. They have been pinched out and are starting up the strings. We could use some winter sunshine. 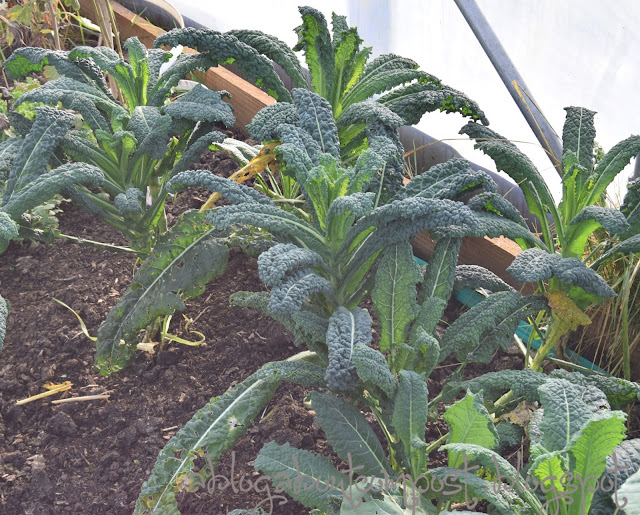 Some of us love kale here and especially Cavolo Nero. 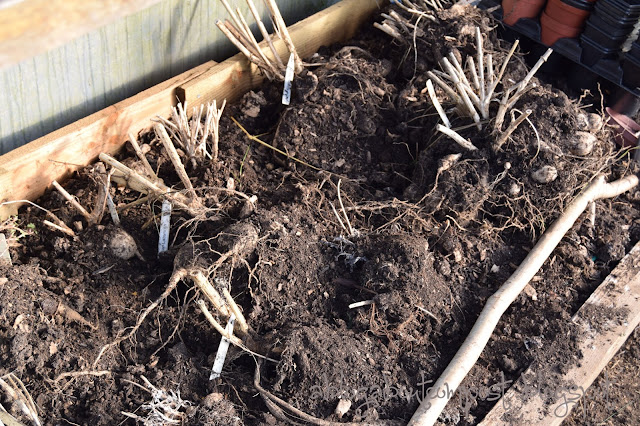 The dahlia tubers finally made it under the bench. I'll be getting them out again soon to pot up. They are not quite buried but I think they'll be alright. 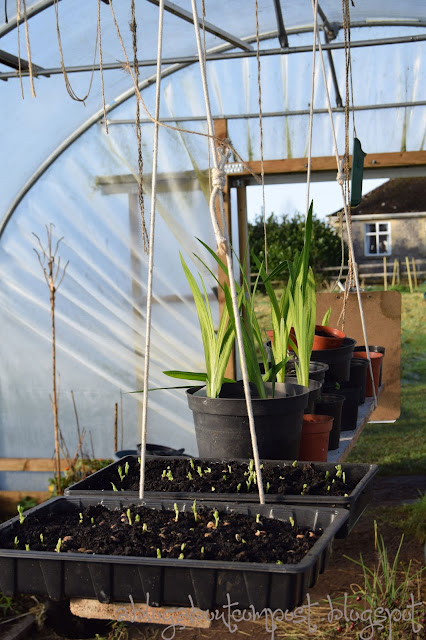 My hanging shelf for anything which mice might eat! Yes, they do eat Freesias. 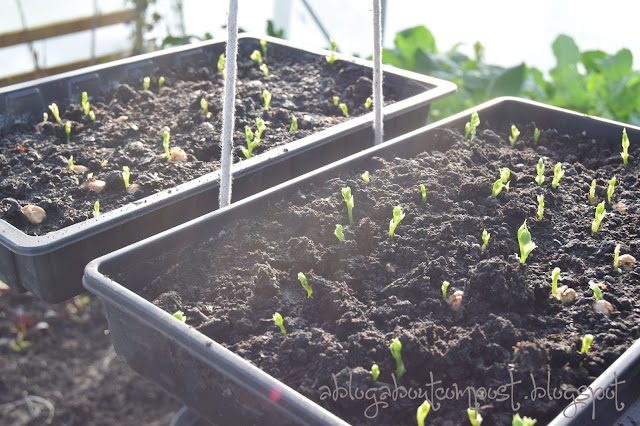 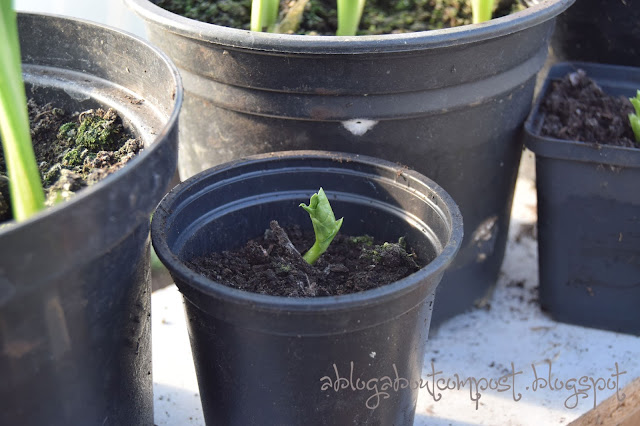 A broad bean shoot. So exciting to have things shooting! 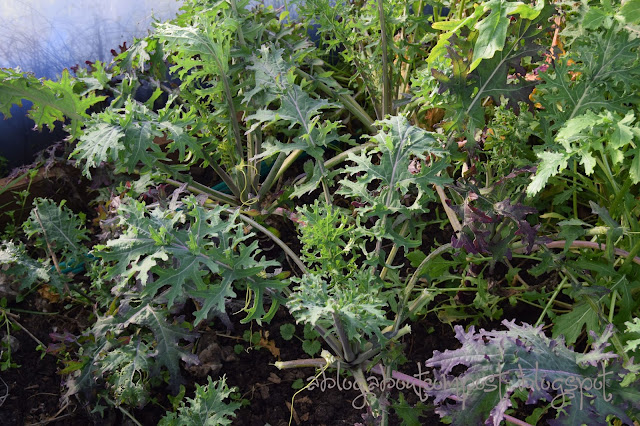 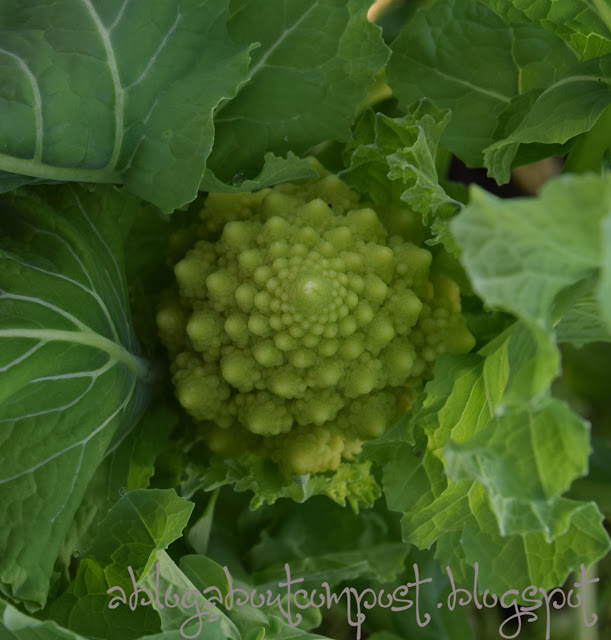 A tiny but perfectly formed Romanesco cauliflower. I've planted them too close together so they have not grown very large. That is, the plants are large but not the heads.

Daytime high - 32∘C I usually only have one set of doors open at this time of year. Most days are in the teens.
Night time low - -3∘C