Adventures in a Poly Tunnel - July

It's been a month of high temperatures and low rainfall until this last week when we have had plenty of rain. The water butts are full again and I am bailing out trays of small pots about to drown. 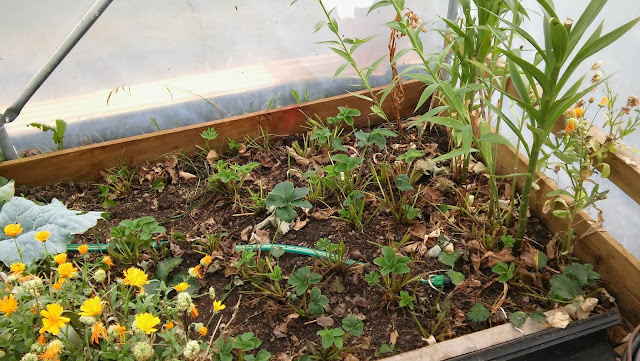 There is plenty going on in the tunnel though I've not spent as long in there as I should have done.

As we go in the strawberry plants are on the left. They did very well but all good things come to an end. I cut off all the leaves and gave them some BF&B and a good watering. I'm going to try and get them planted into lines as it would be much easier for harvesting next year. 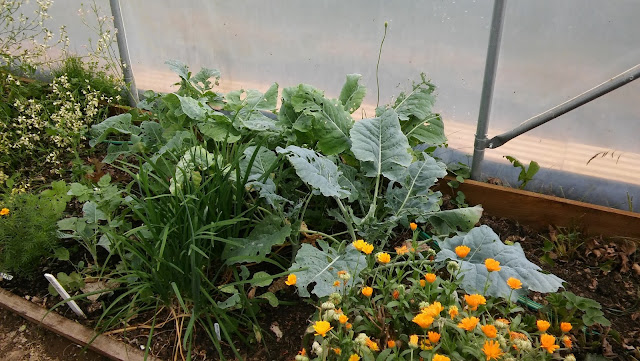 Next some Kohl rabi. Also Garlic chives. Some of these Kohl rabi swelling but I think they have probably been too dry so the rest might have to come out. As I was taking this I notices the holes and discovered plenty of caterpillars so I whipped them off and disposed of them. How? I'll leave that to your imagination. 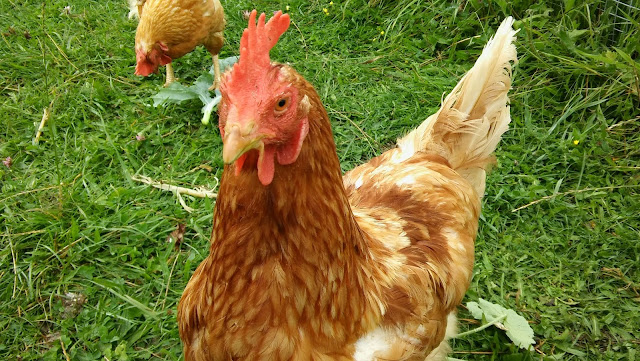 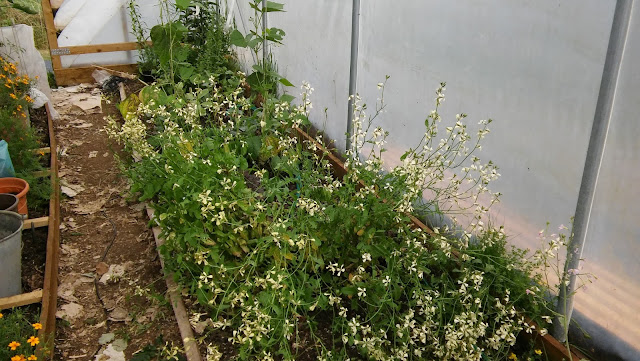 As usual rocket going to seed. It does produce lots of little side leaves so it stays in until I need the space. 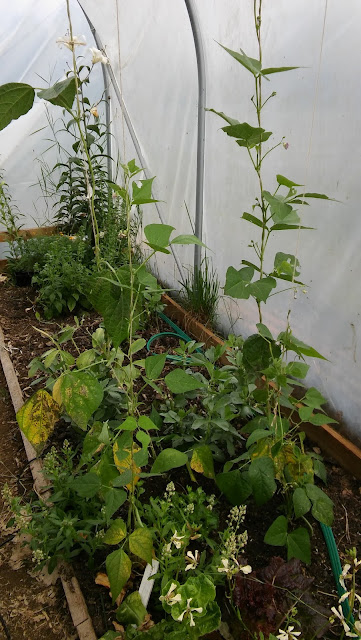 I had a few bean plants in here last year and they did very well so here are some Cobra. Producing lovely long slim beans. The broad beans were behind. I cut them down but a few had more flowers coming at the base so I left them in hoping for a few more beans. 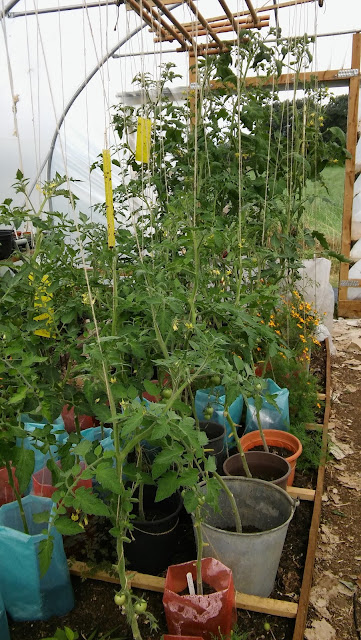 Tomatoes in the centre. I'm doing well at removing side shoots and lower leaves. I've been feeding with molasses as recommended by James Wong (Grow for Flavour) and have also sprayed with aspirin dissolved in water. Also recommended by James. This is supposed to help them fight off blight. So far so good but probably too early to judge. They do look healthier than normal, I think. 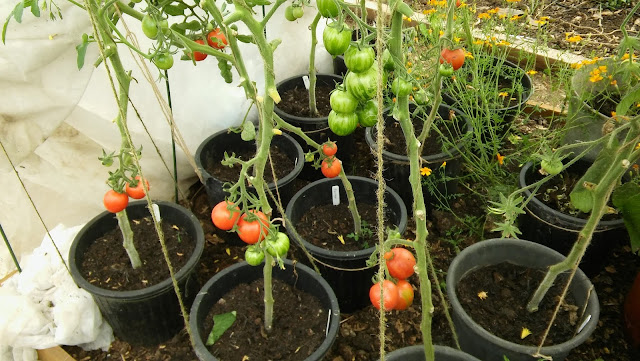 Gardener's Delight and Tigerella were sown first and are ahead of the others. It's so good to be harvesting tasty tomatoes. 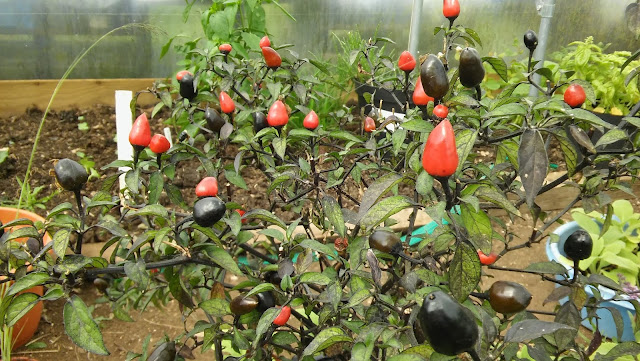 Small black chillis turning red when ripe. I've forgotten the name of them. This plant is now 3 years old. I've kept it in the house through two winters. 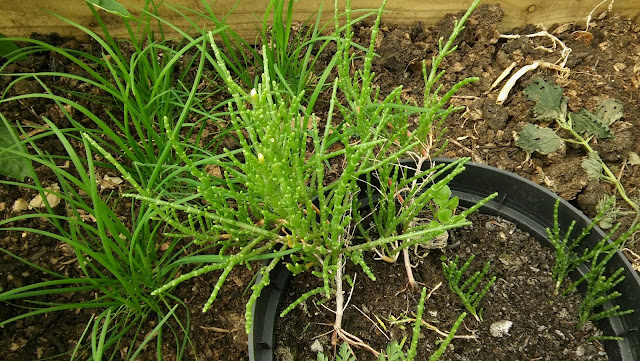 Samphire grown from cuttings from a supermarket packet. Just watered normally with a dose of salty water now and then. More garlic chives in the background. 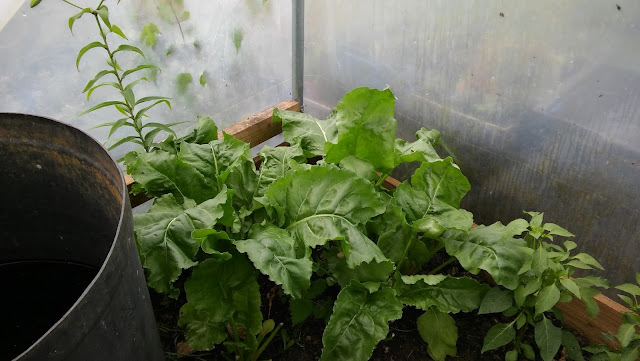 Spinach beet on the right hand side. 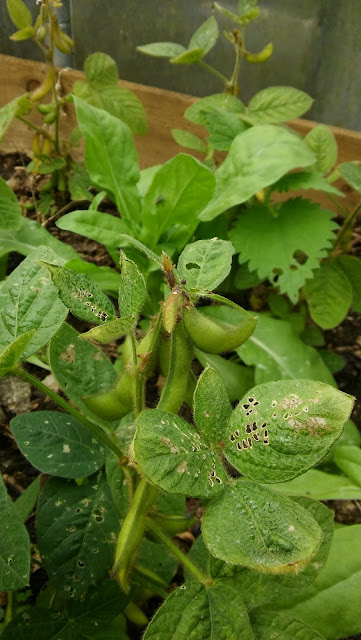 Soya beans. I have not tried these yet, I need to find out when to harvest and what is eating these. Sigh. 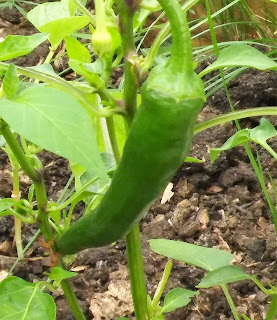 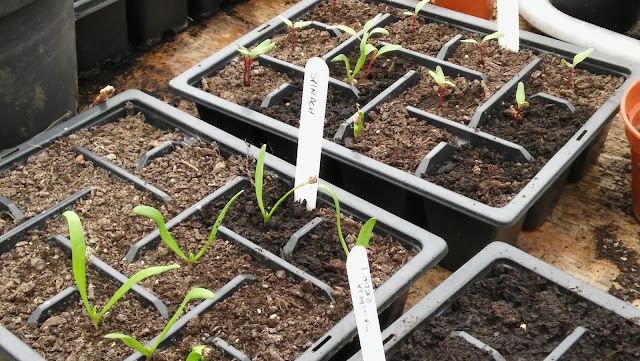 I like to keep trays of things ready to plant when there is a space. I've slipped a bit in the last month but this is spinach and beetroot. I hope to get some more sowing done today. We are having torrential rain so that's a good indoor job! 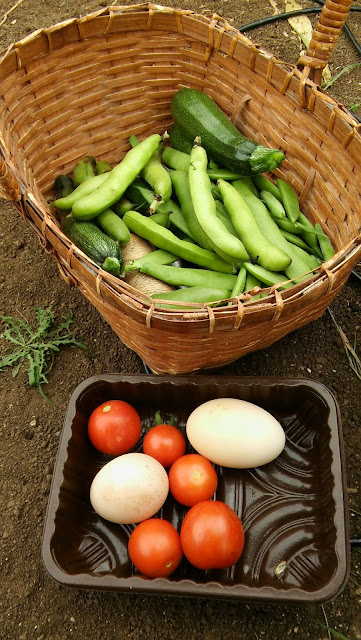 Harvesting in July (Inside and out):
Tomatoes
Garlic chives
Garlic
Spinach
Perpetual spinach
cucumbers
French beans
Broad beans
Runner beans
Snap peas
Parsley
Basil
Spring onions
Samphire
Chillis
Courgettes
Rocket
Beetroot
These are the successes. I've failed to have a succession of lettuce. The seeds have either not germinated or not survived. It is disappointing but I've got some coming on now and I've had a few plants which I've harvested leaves from rather than the whole head.